Drury Lane Theatre in Oakbrook, IL is known for high-quality productions, but they’ve outdone themselves with their current offering of An American in Paris. It’s running from now until March 29th, but you should see it at the first opportunity.

This isn’t the beloved 1951 film, which largely relied on the appeal and dance vision of its star, Gene Kelly with the highlight being his budget-busting but Academy Award-winning 17 minute ballet set to Gershwin’s titular composition.  This stage version retains some of that story’s familiar shape, along with the importance of the dance numbers in storytelling, but in this Tony Award-winning musical version of 2015 the story becomes even more important and darker with a clever book by Craig Lucas and incorporating many more songs by George and Ira Gershwin to help round out the plot. Instead of just S’Wonderful, I’ll Build A Stairway to Paradise and I Got Rhythm, you get I’ve Got Beginners Luck, Shall We Dance, But Not For Me, They Can’t Take That Away From Me and many more.

The characters are largely the ones you know, but the relationships change to become even more meaningful.

This American in Paris is set not in 1950, but in 1945 immediately after the war, and the war is not far from anybody’s mind.  Especially not Adam Hochberg, the incredible Skyler Adams, an ex-pat composer living in Paris and narrator of the show.

He tells the story of how he came to meet Jerry Mulligan, an artist, who like him, didn’t go home after the war. On the streets of Paris Jerry sees great hardship and meets a girl, but she slips away. Adam introduces him to his own patron, Henri Baurel, son of wealthy French Industrialists who seem to have weathered the war with their fortune intact.  Adam is helping Henri put together a nightclub act, because Henri dreams of being a singer, and has the talent to back that up combined with a sunny disposition that speaks of optimism for the future. Jerry is of a similar mind and they both convince Adam to make his new song I Got Rhythm happier.  The three bond and become the Three Musketeers. (And you certainly do not miss Gene Kelly’s bad French or the saccharine sweetness of the small French children here.) 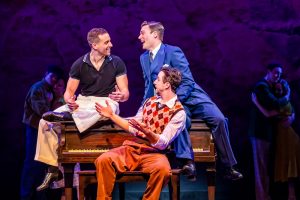 And on the shoulders of these Muskeeters the majority of the story rests.  It is in very, very good hands indeed.

Josh Drake as Jerry Mulligan is very nearly channeling Gene Kelly here.  He has the sunniness and deft lighthearted charm, but also the same athletic dance moves.  Nobody is Kelly, but he is a credit to this part and makes it entirely his own while keeping the spirit of the so-important original.  He’s an amazing dancer, a stronger singer than Kelly, and just exudes post-war optimism and confidence though he has also seen the darker side of life.

Will Skrip as Henri is up with two powerhouses and yet nearly steals every scene he’s in.  He’s ridiculously fey, but it works. And when the big secret of his past is revealed, you buy it utterly. He makes Henri believably a good guy. 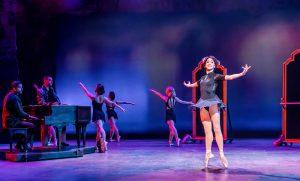 Leigh-Ann Etsy as Lise Dassin rounds out the heart of the cast.  And here, instead of just being the girl Jerry falls in love with and Henri is supposed to marry, she becomes the love interest for all three of the Muskeeters as Adam falls for her as well, each sincerely and separately, so when S’Wonderful happens, all three of them are singing it together and doing amazing harmony, Instead of Jerry and Henri trading lead vocals while Jerry dances around.  Whenever the three are working in concert, you’re seeing one of the best moments of the show.  Esty is as strong as any of the male leads.  Her singing and dancing are both superb and she pulls off the best French accent of anyone in the cast.  She is glorious to watch and she acts up a storm as well.  As Lise, she is leading no one on, but just trying to live her life and decide what is best for her. 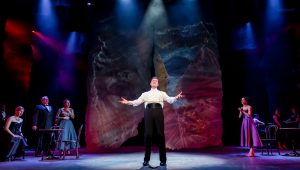 All of the characters, unlike in the film, are just trying to establish themselves in the post-war era.  Jerry as a painter, Adam as a composer, Henri as a nightclub singer and Lise as a ballerina. They’re full of optimism, but they are barely scraping by (except for Henri, who is expected to take over the family business instead of pursuing his dreams). The plot is in many ways very different from the film, especially in detail and character motivation and the inclusion of Henri’s parents in important supporting roles. 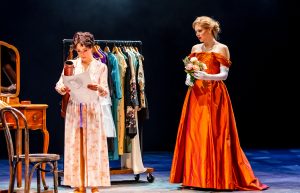 Milo also has a much more pivotal and important role and she comes off far better in the musical than in the film. And it’s important that Adam is now Jewish instead of having the last name Cook, like in the movie.  The play does not look away at what happened when the Nazis took over France.  And the Burels also have an important backstory.

I’m not going to spoil the many, many plot differences here. The stage show is not the movie. They both exist and are wonderful on their own.  You will be delighted with the treatment of the many additional Gershwin songs added.

A note about the dancing here.  Unlike the film, the dance numbers don’t exist to be the highlight. Everything in the show exists to serve the story.  The dance numbers, like the dialogue and the songs, move the plot along and help shape the story. It’s a much stronger and more integrated show than the film is.  But the dancing is among the best I’ve seen on any stage in Chicago.  The integration of tap and ballet is just as good as in the original film. 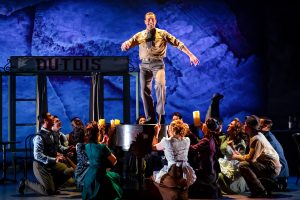 Several of the songs and dances veer off into fantasy sequences and those are utterly seamless, despite being performed live and on stage with no special effects.  But it’s absolutely clear when someone is having a fantasy instead of a real experience nevertheless.

All of this was masterminded by director/choreographer Lynne Kurdzeil-Formato, who got her actors/singers/dancers doing incredibly complicated things while making it look spontaneous and easy. It was all so splendid, she deserves high praise.

The costumes by Karl Green are perfect post-war glam.  The scenic design by Kevin Depinet, lights by Lee Fiskness and projections by Kevan Loney move you from place to place seamlessly. The sound design by Ray Nardelli means you can hear a pin drop anywhere on stage and every line of dialog or note of a song is perfectly heard by the audience.  It’s all superb.  You must go!

Tickets are available at the Drury Lane Box Office.

February 8, 2020 Joe Gruberman Music & Arts 0
The Phoenix Theatre Company celebrates its 100th-anniversary season this year, smartly choosing a homegrown musical production with a most timely theme as the celebration’s centerpiece. A highly-collaborative piece, ¡Americano! is based on the true story […]

December 11, 2017 Suzanne Magnuson Entertainment 0
While the holiday season surely brings a wealth of opportunities for family fun, in Chicagoland it mostly brings the same tried and true theatrical opportunities.  Endless Scrooges and Nutcrackers and Nativities in all their varied […]