Karthik Mohan was highly inspired by Kamal Haasan’s Uttama Villain and decided that he wanted to join the film industry. The digital era was just beginning and short film makers were emerging everywhere. He joined a film club and started making short films with a group of film enthusiasts. They had a lot of good stories but needed a greater understanding of the craft to tell those stories well. Sound Design was one such department that needed a lot of improvement, but no one knew where to start. Karthik decided to take up the challenge and that was the beginning of his journey in film sound. He recorded his own sounds to create a library and started learning by doing the sound design for short films. Randy Thom, Director of Skywalker Sound, conducted a workshop about storytelling using sound in films and that made Karthik want to do sound for the rest of his life. He got an MFA in Film Production with Sound Design emphasis from Chapman University and was nominated twice as a finalist for the Cinema Audio Society Student Recognition Award. He is currently an internationally acclaimed sound editor and has worked on a variety of content in Hollywood and India. Some of his notable work include projects like the Indian blockbuster Mahaan, Indie thriller The Girl on the Mountain along with digital content for shows like The Wheel of Time and Hanna, all of which are available on Amazon Prime.

Film Sound Editing is a laborious job, so what keeps you motivated?

As I started exploring sound and began listening to more films, I realized that the sounds we hear in films are not exactly what we see. Several sounds are layered carefully to create that cinematic reality. This process of choosing the sounds and layering them is what excites me the most. Depending on the story and what we want the audience to feel at that moment, we can get as creative as we want. Personally, I don’t do well with routines or monotony and the best thing with sound editing is that no two sounds are going to be the same. As you start recording sounds and acquiring libraries, you slowly begin to dissociate a sound from its image in real life. That gives you so much room to play with. The same sounds when played at different levels or pitches can sound very different from each other. Even the same sounds used in different contexts can have vastly varying emotional impacts. Right from something as simple as choosing the right footstep to designing a complex monster, my process remains the same. I love sound and the amount of attention we need to give to the little details to get the right sound. That is the best motivation I can ever get.

How do you choose the films you work on?

As a believer in destiny, I feel that a lot of the projects I work on, choose me rather than the other way around. I usually never say no to a project if I have the time to work on it.

That said, whenever someone comes to me with a script or a cut, I primarily look for a couple of things. First is how much of scope the film gives me to do something interesting both art wise and craft wise. By interesting, I am not only talking about grand sound design. Sound must be integrated into the fabric of the story and not just be an after-thought that follows the visual. Only then will we be able to enhance the story and ultimately the audience’s experience. Second is the director’s vision. A film might have a lot of scope for sound and I might have a thousand ideas to tell the story using sound. But those ideas have to resonate with the director and their thought process. End of the day, we work with the director to help them bring the film they envisioned, to life. For example, Las Escondidas, for which I was nominated for an MPSE Verna Fields Award, is set in an auto repair shop. This was something that we discussed even before the script was finalized. That automatically allowed me to be involved in the storytelling process right from the start. Added to that, my director was very clear about having minimal dialogue and almost no music in the film. That gave me the space to use the ambience of the repair shop with all the tools, drills, machines etc in different ways to reflect the state of mind of the characters. 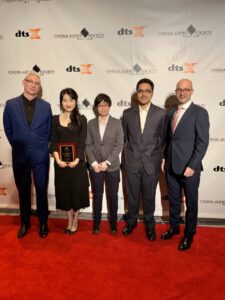 You have worked on acclaimed projects both in India and Hollywood. How different are both industries?

A sound by itself has no meaning. The context in which a sound is used, is what tells a story. That context varies widely with each country and culture. Even if the same film is made in both industries, it will turn out to be very different for this reason. I watch a lot of content from both these industries and try to keep myself up to date. I also observe and interact with a lot of people to better understand their way of life. Though the sensibilities might vary, as a sound editor, my process is pretty similar when I’m cutting Sound effects or Foley. Dialogue is where the big difference lies. Hollywood films have all the dialogue recorded on set while in most Tamil films the dialogue is 100% ADR. After coming here, I had to get used to listening to production sound and understanding the nitty gritty of dialogue editing. Each of these styles has its own set of advantages and challenges. Both are totally different workflows and there is no right or wrong. With 100% ADR, we get very clean dialogue but a lot of work has to go into recreating the right emotion in performance and the acoustics associated with the space. With production sound, we capture the original performance but have to deal with noise and very carefully clean up all the dialogue to make it smooth. In case we replace some lines with ADR, then those need to be carefully matched to rest of the production dialogue. We also get some production sound effects that can be cleaned up and used. Another difference is in the way the films are mixed. Hollywood mixes are a lot subtler and here we pick and choose specific moments to go big. A lot of the sound comes from behind the screen and the surrounds are used judiciously. Indian cinema is a celebration of life and the soundtracks rightly reflect that by being larger than life.

What advice would you like to give to aspiring sound editors?

Know the industry and be clear as to why you want to enter this field. Each of us has an idea of what the film industry might be like and are influenced by what we read and see in the media. But most of that is an illusion and this industry comes with a lot of challenges as with any other field. There is absolutely no glamour associated with sound and there is a lot of hard work, long hours and uncertainty involved. One has to be really passionate about sound to do well here. The fundamentals must be very strong because irrespective of how technology advances, the physics of sound and the way we perceive sound remains the same. Change has been constant, be it from analog to digital, from mono to surround to Atmos today and we must adapt and move with the times. Today, the abundance of automation and plugins is good but that can also be dangerous as it is easy to overuse them. Anyone can learn how to use Pro Tools or Rx in a short span of time. It is only with experience that we understand how to use all these tools and choose the right sounds to effectively impact the story with sound. As we keep doing this, our speed increases and so does the quality of our decision making. Every project teaches us something new as long as we are open to learning and growing. So just trust in the process and keep it simple. 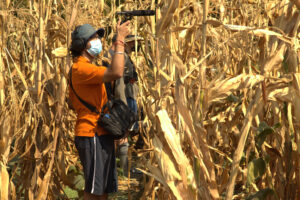 Please tell us about your upcoming projects.

I worked as a sound editor on Iravin Nizhal which is nearing completion. Directed by 3 time Indian National Award winner R.Parthiban, it is the first non-linear single shot feature film in the world and the film has entered the Asia Book of Records and India Book of records. I have All the Colors of the Dark and Four Samosas coming up. On All the Colors of the Dark, I am a Foley Editor and will be working with 3-time Primetime Emmy Winning Mixer Stephen Tibbo CAS. As a sound editor on Four Samosas, which is premiering at Tribeca Film Festival in June, I will be working with Kunal Rajan MPSE. I have also ventured into production with Ka! for which I was also the Supervising Sound Editor. We just started our festival run with the prestigious Signs Film Festival in India.

How can our readers connect with you?