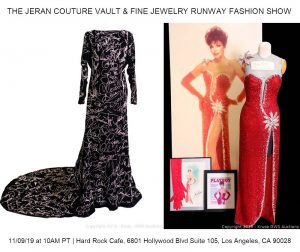 It took over 30 years to make and carries over 360 hand-beaded signatures of some of Hollywood’s most fabulous leading ladies, as well as women in culture and politics– the once missing “Hollywood Graffiti Gown” is legendary, and unbelievably, no one knew where it was for almost the last decade. It was designed by Jerry Skeels and Randy McLaughlin of the Legendary Beverly Hills based, Jeran Designs. Jerry and Randy were two of the most influential and in demand couture designers of  Hollywood fashion.

Having designed for motion picture, stage, and television royalty such as the Spelling Family, and many others.   The famous designers worked on numerous shows and Hollywood’s most elite stars wore their designs. Have you ever wondered who made some of Vanna White’s iconic gowns? It was Jeran Designs.

The Hollywood Graffiti Gown is as legendary as the over 360 women whose names were painstakingly hand-beaded into it. The gown took almost three decades to create. The gown was unveiled in 2004 at the Academy of Television Arts & Sciences Ribbon of Hope event, a fundraiser for HIV/AIDS awareness. The gown has traveled the world and has become a global symbol of glamour, luxury, hope, compassion and philanthropy. There is no other couture fashion gown like it in the world. Lead Auctioneer, Brigitte Kruse also expects to see some of the most sought after Hollywood stylists appearing at this event to purchase the couture gowns for the upcoming Red Carpet  Award Show Season for their clients.

Celebrities and Jeran Designs devotees who will attend the auction event including The Supremes Mary Wilson, Actress Beverly Todd, actress Judy Pace and singer-songwriter Claudette Robinson. Celebrity confirmation will be updated daily . There will be two  red carpet arrivals  at this event the first will be at 9:30am, the second one will take place at 12:00noon. Stars from TV, Film and Music are confirming daily.

Many of the Couture Gowns up for auction will be part of a runway fashion show, with live models including several dancers who toured with Justin Timberlake and Ariana Grande. The Auction and Fashion show will take place simultaneously. GWS is starting a new trend in how Couture is presented and sold  at auction.

Also, $8 MILLION DOLLARS in Couture jewelry  will be presented for auction including special pieces from Bulgari, Stefan Hafner, David Webb, Van Cleef and Arpels to name a few.

Other highlights of the over 175 vast couture gown collection includes; Jeran Designs red gown worn by Dame Joan Collins on her December 1983 Playboy Magazine cover. Collins in the dazzling gown remains one of Playboy’s most iconic covers. The auction also highlights an original Jeran Designs hand-beaded black “Art Deco” gown most recently worn by The Supremes’ Mary Wilson at a red-carpet event in Hollywood.

The auction and live fashion show will take place on Saturday, November 9, 2019 at The Hard Rock Café Hollywood beginning at 10:00 a.m. and lasting until 7:00pm

Bidders can bid live on-site, by phone or online.  At  bid.gwsauctions.com

There are no upcoming events.